Trying to be sunny.

We had breakfast at Blue Heron: a panini with egg, ham and cheese that really was good.

Then we toured the Tillamook Cheese Factory.

I learned about these new robotic lines where the cows can walk up to get milked by the robot whenever they feel like it. We watched a cheese backup on the packaging line, which subsequently got fixed, then sampled five or six cheeses. We bought some cheese curds, sharp cheddar slices, some butter and two bags of black licorice. We had macaroni and cheese for lunch then ice cream.

We drove down the Oregon coast and saw some wind, waves and rain, and some beautiful coast. It was pretty cold. Then we got to Beverly Beach State Park to camp and sat on the beach for about an hour, waiting for the sunset. I got this picture totally by accident when I was trying to get a screenshot from my video.

The clouds broke up and it got brighter until the sun was too bright. So we went to our campsite (very close by), took a picture of Arvi and used the restrooms.

When we got back to the beach the sun was behind the clouds. For the night. The sky was a beautiful pink in the East, however. 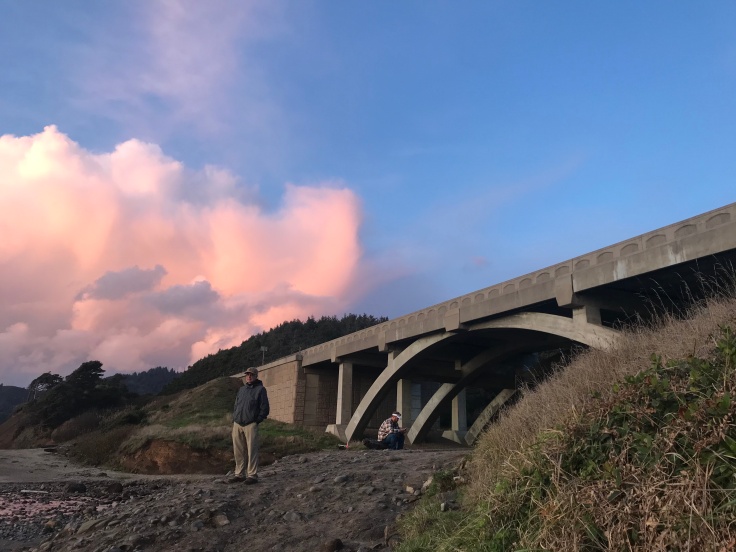 I cooked some tortellini which I combined with some fresh sautéed mushrooms and garlic, peas and chicken in a cream of mushroom soup sauce. Then some grated Parmesan on top. We had this with Pinot noir and it was so delicious. It turned out to be a nice evening.