Sleep, glorious sleep! Ten hours of it! With all of the bar, barbecue and card playing in Austin, we weren’t getting much sleep. Well, we made up for that in this nice little campground in the pines.

The Caddo tribe lived in these parts when the Spaniards arrived in the 1600s. It sounds like they were intelligent and friendly, until three years of epidemic illnesses killed too many of them. They were relocated to Oklahoma some time ago. They left some ceremonial and burial mounds here at Caddo Mounds State Park. The park was ravaged by a tornado in April, 2019. It’s now pretty much three mounds and some informational signs. Not really worth an entrance fee, if you had to pay it. Tom is here, next to the soil which has been dug up by the wild pigs – another thing for me to be scared of!

I thought we would skip out of Texas after our belated Christmas celebration. We’ve been here 5 1/2 weeks. Turns out we are in no hurry to leave – the weather has been much to our liking!

We decided to approach Louisiana from the south, since the only place for sure we want to visit is New Orleans. So we drove south and find ourselves in Texas’ Big Thicket region. This was once a very large super-dense forest. It is now preserved only in a few parks around here.

We are at the Martin Dies, Jr. State Park. We wondered if the name was pronounced Dies, as in expiring, or pronounced in a Spanish way, like DEEahs. I asked the question and was told Dahs, like expiring, the Southern way.

It is very forested with pine, sweet gum, oak, cypress and swamp. We are no longer Out West. We are in The South! 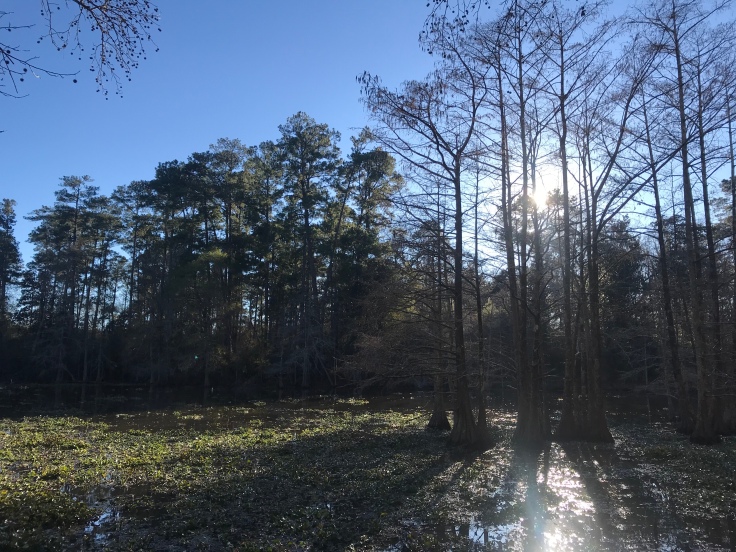