We drove south to Green Valley to see the Titan II Missile Museum.

Diesel recommended the museum. Diesel was a fellow camper in Monterey whom we named because the moment we backed into our campsite, he asked if we were going to turn the fuming and stinking diesel engine off. We ended up chatting and he gave us some ideas of things to see in Arizona, the missile museum being one of them. 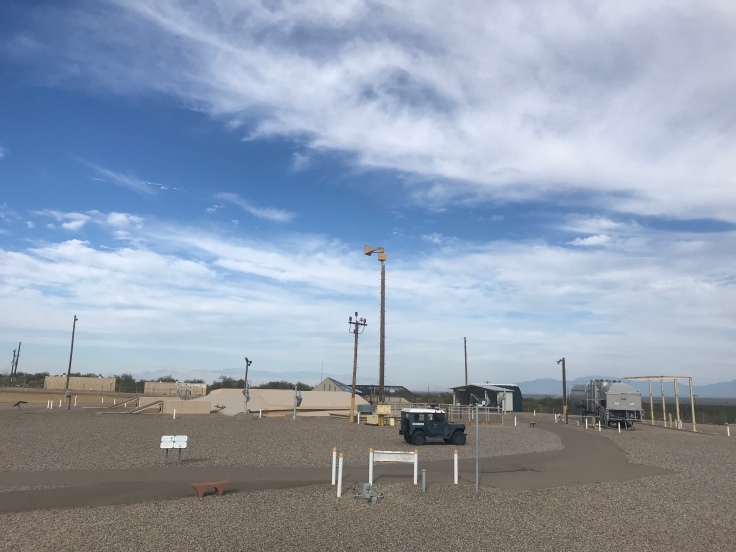 The museum is spectacular. Everything in the missile silo is the way it was during the Cold War.

Fifty-four missiles were built in the 1960s as a deterrent to nuclear war. They each had programming to strike three targets, and one target was selected. The two officers and two maintenance workers did not know the target. They knew to turn the two keys simultaneously if the order to do so contained the proper credentials.

Of course these missiles were not used, as they were only to be a counter strike if we were under nuclear attack. So they did their job. All were disassembled in the 1980s, except for the Green Valley 571-7 site, which was used for training instead of holding a weapon.

The museum provides a very professional tour of the facility. One can get a real appreciation of the seriousness of the Cold War in this tour.

On the way back to the campground, we passed a guy on the road riding a horse and talking on his cell phone. He was not using his hands to control the horse. Is this distracted riding legal?

We stayed in the same campground but moved to a different site, hoping to avoid pack rat problems. We bought a flashing light from Ace Hardware to put in the engine compartment because, according to the locals, pack rats stay away from light.

Tom grilled a steak outside and with a salad we had a lovely dinner!