We have already been up and down Highway 1 from Monterey to the Julia Pfeiffer Burns State Park a few times now. So, leaving the area and going south, we headed down Highway 1 one more time, starting at Monterey, and again going over the Bixby Bridge.

It was already 80° at our campground when we left at 9:30 AM. The temperature varied from 72 to 90 all day, depending on how far or how high up from the water we were, and if we had any shade.

The ocean was so sunny and calm today, almost glass. 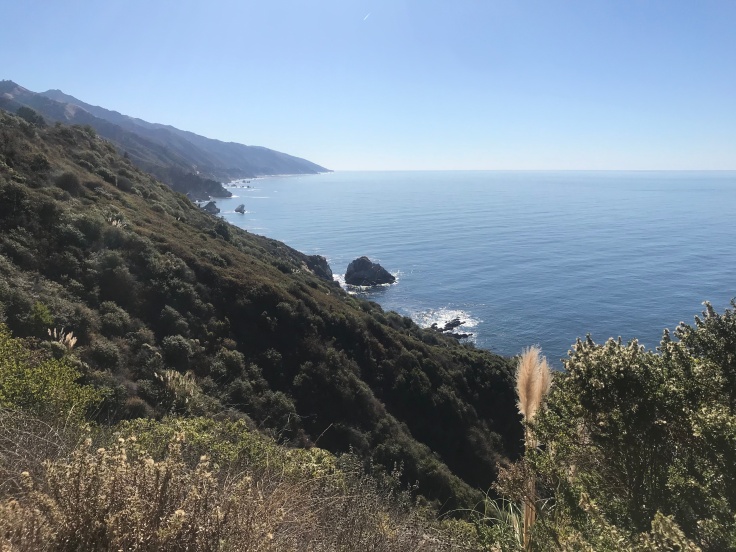 We are nearing the end of the dry season, so of course everything is brown.

Driving Mustangs and motorcycles on Highway 1 is still definitely a thing. We passed many more Mustangs, and a few BMWs and VWs with the top down, than we did motorcycles.

We still experienced many jaw dropping, er, drops, to the ocean, which I am convinced is more difficult for the passenger than the driver. And up high in the Sprinter, I often don’t even see the guard rail or any land between me and the ocean hundreds of feet below.

Here’s a way to experience one of the weirdest feelings ever: look through binoculars trying to identify car types six cars ahead while someone else is driving around curves and cliffs. You feel like you’re going to hit a cliff or go over a cliff RIGHT NOW.

It should also be noted that I had sweaty palms during most of the drive.

Near Limekiln State Park there was a beautiful new tunnel that I wish I had photographed. Then we found the site of a 2017 mudslide that closed Highway 1 for over a year. The road is nice and new there.

Seriously, portions of the road are frequently closed, and we had to wait for construction several times. It really is treacherously high and scary at places.

At the Willow Creek picnic area at Los Padres National Forest dolphins and sea lions were swimming and barking, respectively.

Then we arrived at San Simeon, where elephant seals can reliably be found along a mile stretch of the ocean. These blobs of marine animal are so ugly they are cute! 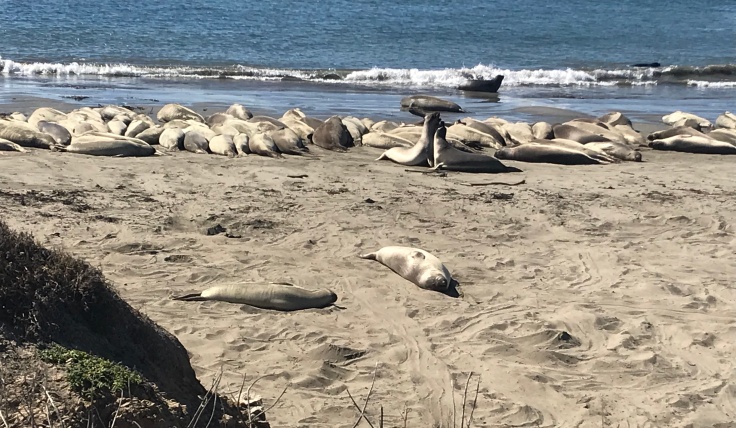 Since 2013, I have stopped at the Hearst Castle twice, only to arrive after the tours have ended for the day. Well, today we made up for that! We toured the grand rooms of the mansion and walked around the grounds, as much as we were allowed. I was happy to see it and learn a little about William Randolph Hearst, but I’m just not sure how I feel about someone spending so much money on only one of his houses, and flying in all the rich and famous for a few days. I cannot comprehend that lifestyle.

I need to get written permission to publish any photos of the mansion and I forgot to ask how to do that. So I’ll just show this photo of the parking lot. Dan and I think more parking lots should be built with solar panels to shade the cars and glean electricity at the same time. .

We are camping at a state park in San Simeon and it is really quiet here. A screech owl announced its presence when we backed into the campsite. A while later, we heard coyotes not far away. By 7:30 the night sky was very black and the stars are the best I have seen in a very long time.