Spent the night at the picnic area of Aune Osborn Park, per tip from iOverlander. It is going to be hard to top this campsite. Just south of the Soo locks, ships passed us extremely close to the shore, as they had to navigate some small islands in the St. Marys River. Saw the Roger Blough. I think this is a name from my youth. It was built in 1972.

Woke up a little earlier than I had hoped, 5 AM, looked out the front window, and there was a freighter going by lit up in the dawn twilight. Simply beautiful.

I met a lady who drove to the park to see her son, who was working on a passing freighter, the Edwin H Gott, going to Duluth from Ohio. He came out on the ship’s walkway and waved to her and she yelled that she was proud of him and she loved him. She must have been from far away because she said she couldn’t get a hotel room. This was around 6:45 AM.

Went to the Soo Locks and was lucky enough to see the Lee A Tregurtha go through the lock. This ship is the second-oldest on the Great Lakes and was built for service in the navy in 1942. It has two military ribbons for its deeds. 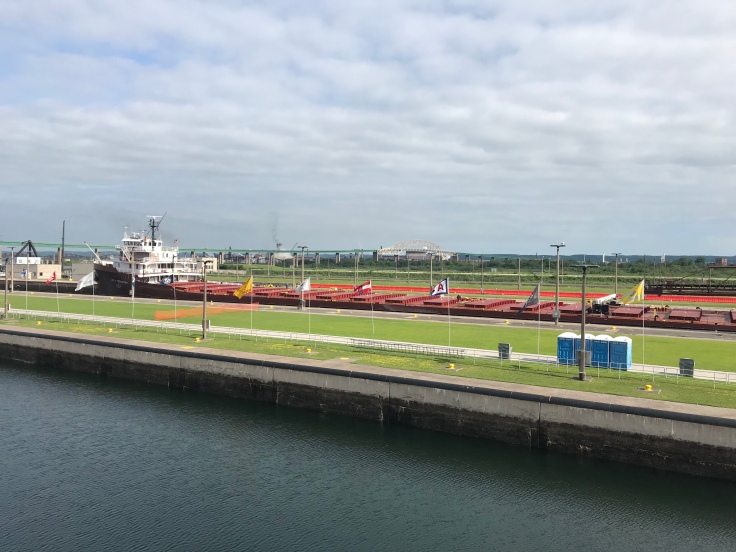 I was very worried because we were taking more than four bottles of wine into Canada. (Not much more than four bottles.) Tom was really worried that we were going to get pulled over and have to pay duty tax, or WORSE. Fortunately, the border guard asked him if he had any alcohol or tobacco, and he said we brought some wine, and the guy told us to have a nice time and waved us through.

We drove through Wawa in drizzle.

We camped at Neys Provincial Park on Lake Superior. Nazi POWs were held here during WWII. Lots of mosquitoes but the weather had cleared up and it was beautiful.