The trip to the Keys was an adventure.  Who would have thought that most campgrounds would not allow boats.  It was a real problem.   Most the snow birds were still there and many campgrounds were full.  I have to thank my friends Glenn and Dee for the opportunity to driveway camp at their place.

Thankfully the Everglades National Park did not have an issue with boats so we stayed at Long Pine Campground.  It was an an hour drive to the Keys to fish.

It took some time to find boat ramps.  We found a few real nice ones.  The ramp in Harry Harris Beach and Park in Tavernier is a Monroe County ramp that is especially nice.  It is on the ocean side and has easy access to Tavernier Creek to access the Florida Bay side.  There is fuel and bait on the creek.  There currently is no ramp fee due to the park entrance booth being blown away by hurricane Irma. We also used a small Monroe County ramp on the bay side.  This ramp is not on any map but is in Sunset Point Park.  It services small boats and jet skis.  It is nice and sheltered.

Photo of ramp at Harry Harris Beach and Park.  Notice all the sea grass the wind blew in.  The park crew is there cleaning this out every day.

Plantation Yacht Harbor Marina ramp is really nice and in a good location in Islamorada.  It’s on the Florida Bay side.  There is a $30 round trip ramp usage fee.  This ramp is locked up at 6:00pm so make sure you are back in time.

Jen was with me the first four days in the Keys.  It was too windy to fish so off to Key West. 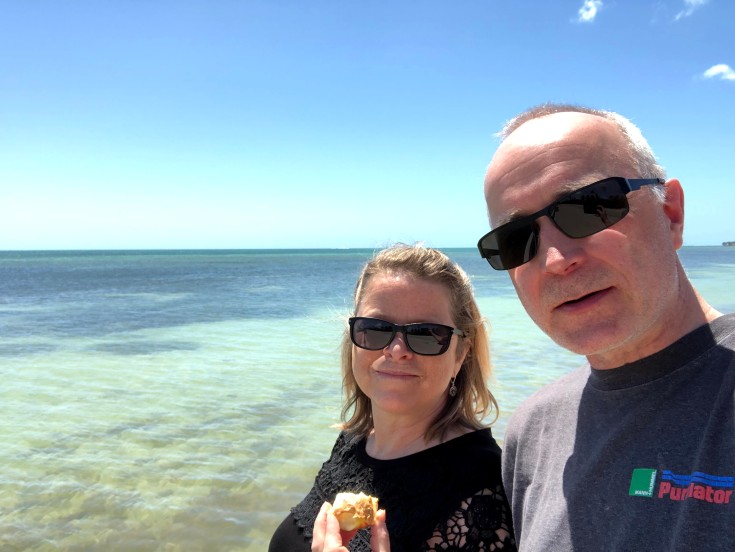 Jen was my Captain for a few days allowing me to focus on fishing.  She got us back to port safetly.  We found calm water on the lee side of mangrove islands.

Below is a link to a video of us pulling the boat out of the water.  I can hear a squeak. Hope it’s not a bearing issue.

Arvi Pulling The Boat Out Of The Water

We caught a lot of fish.

Andy joined me the second week of the trip.  For the most part the weather was really nice.  We saw a strange thing out on the water.  An iguana was swimming out in the Florida Bay about a mile off shore.  See its picture way down below.

Any leaves and Ed arrives

Ed and I went after larger fish and found a lot that had lockjaw.  We saw many huge Tarpon.  We had a school of 7 or 8 Tarpon swimming around the boat.  They were not interested in anything we had to offer.  Seeing them was really cool.  These two were part of a group of six that swam just behind the back of the boat.  The water depth here is about 8 feet.

2 thoughts on “Arvi Goes Fishing In The Florida Keys”