We had a whole day to explore the Joshua Tree National Park. We even had time to go to the post office in town and mail some important items. We went to the Oasis Visitor Center and did two hikes back in the park: one around a small valley hidden within rocks, where cattle rustlers used to hide stolen cattle. The other hike was back to a ranch house which was used in the early 1900s, before Joshua Tree became a national monument.

The desert flora and fauna are different than anywhere we have been so far. Today we saw jack rabbits, road runners, pinyon oaks, and yucca plants, including the Joshua Tree.

We went to an overlook where we could see the San Andreas Fault. It was extremely windy up there so we took shelter behind a short wall and got chatting with another couple there, Jeff and Kathy. Jeff and Kathy are from San Diego and pointed out many of the features of the valley below us. For instance, from damming the Colorado River, at what point we are not sure, a lake called Salton Sea formed, or grew bigger. We could see that lake and the city of Palm Springs from our lookout point. They told us about these Santa Ana winds, that blow cold, dry and fierce from the east this time of year.

The evening sky was especially beautiful, as in the east there was a lovely shade of pink with blue below it. 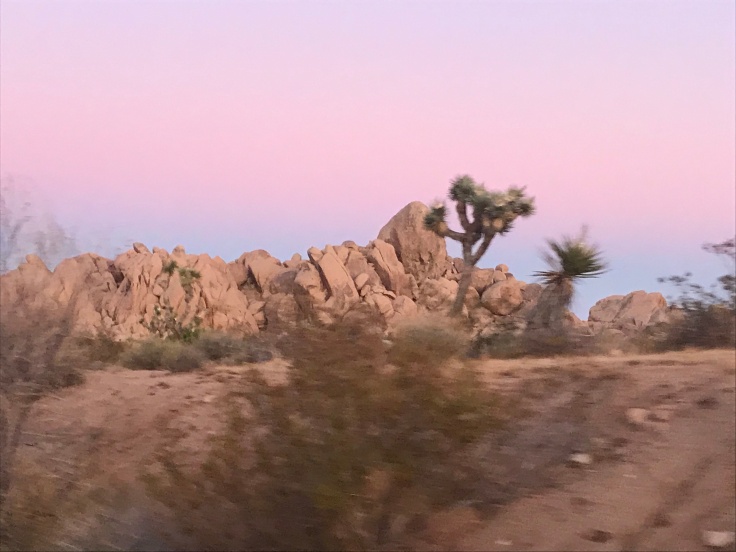 Many people were climbing the rocks and watching the sky at sunset. After dinner we had a reprieve from the Santa Ana winds. Tom built a warm fire at our campsite. The Joshua Tree campground fires are all very cool, because the fire rings are set near large rocks and the fire casts shadows on the large rocks.

One hundred and twenty miles from Los Angeles, which glows on the western horizon, one can see the Milky Way and many stars normally not seen. There are stars from one horizon line to the other. I saw a shooting star. I wish Arvi had a moon roof.

We picked our campsite around lunchtime, paid for it, marked it with our registration form and Lego-type leveling blocks, and ate lunch there. Then we drove around to do the fun hikes, etc. When we got back to our campsite, the leveling blocks, which we had left on our picnic table, were gone. Now, it is a well-recognized custom to leave something at your campsite so that other people will know it is occupied and not set up camp in it. The disappearance of our leveling blocks made us feel violated.

Next time we will leave the vinyl tablecloth I bought in the 1990s.